Last season the series pitted drivers from Ransomville Speedway’s Street Stock division against Thunder Stock drivers from the New Humberstone Speedway in a four race series. A total of 40 different drivers took part in at least one series race. Dave Bailey of Hagersville, Ontario captured the first ever Can-Am Thunder Stock Challenge championship by winning three out of the four events.

For 2020, both Ransomville and Humberstone will hold two events each with a fifth race being added at the Ohsweken Speedway, located on the Six Nations Reserve in Ontario. Ohsweken has a thriving Thunder Stock division as part of their weekly Friday night racing program. Reigning Can-Am Challenge champ Dave Bailey is also a five-time Ohsweken track champion.

“We were very satisfied with the level of participation we saw during the first year of the Can-Am Challenge,” said Jenn Martin, Ransomville Speedway general manager. “Now with Ohsweken coming board, we are confident this will help to grow the series.”

The Can-Am Thunder Stock Challenge will kick off on Sunday, June 7 at Humberstone. The series then heads to Ransomville on July 17 for the John Susice Memorial. Ohsweken will host their race on July 24. The final two races of the series will take place over a span of five days starting September 13 at Humberstone followed by the King of the Hill 75 at Ransomville on September 18.

All series races will pay $500 to win and $50 to start except the King of the Hill, which will pay $1,000 to the winner as well as have lap money up for grabs. The top five in series points at season’s end will share in a $1,500 points fund that includes $500 to the overall champion.

Officials from all three facilities are pooling their resources to search for a series sponsor. The potential title sponsor would receive multiple mentions at all three tracks throughout the season, and reach a wide base of race fans on both sides of the border. 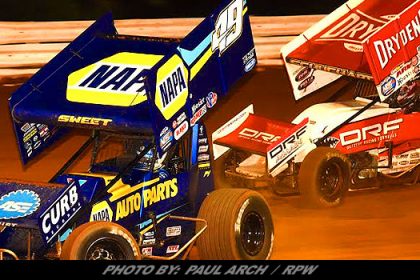