Story By: NICK GRAZIANO / WORLD OF OUTLAWS – CONCORD, NC – The World of Outlaws NOS Energy Drink Sprint Car Series is bringing a 90-plus schedule across 27 states with game-changing purses at stake in 2021.

Key to next season is the revitalization of a full slate of crown jewel events, including the 60th NOS Energy Drink Knoxville Nationals with a potential $200,000 to the winner; TWO Kings Royals each paying $175,000 to win from an $800,000 purse; an additional $100,000 on the line for the Jackson Nationals if the same driver wins the Huset’s 50 ahead of Jackson; and the historic Williams Grove National Open with $75,000 to the winner from an enhanced payout through the field.

“We have set the stage for an incredible 2021 season,” World of Outlaws CEO Brian Carter said. “The teams will be racing for unprecedented purses in the recent history of the sport, we’ll be back to racing coast-to-coast, celebrating the 50th annual DIRTcar Nationals, the 60th annual Knoxville Nationals, two Kings Royals, a stellar Jackson Nationals with big-money incentives, and we still have a few more surprises to reveal this winter. We’re definitely looking forward to kicking off a huge new season in February.”

The Series will make its inaugural appearances at four tracks in 2021 and return to several iconic venues in the upcoming epic new season, which will kick off Feb. 5-7 at Volusia Speedway Park in Barberville, FL for the 50th DIRTcar Nationals, and run into November when it wraps up with the championship-crowning Can-Am World Finals Nov. 4-6 at The Dirt Track at Charlotte.

“The COVID-19 pandemic put a damper on our initial 2020 plans, but I think we’ve put together an exciting 2021 schedule that brings the Series back to its roots of a long season spanning across the country,” World of Outlaws NOS Energy Drink Sprint Car Series Director Carlton Reimers said. “Several new tracks have been added this year that should please drivers and fans alike, along with fan-favorites still in place.”

Magnolia Motor Speedway (Fri., Feb. 19) – For the first time since 2011, the World of Outlaws will make its return to Mississippi with its debut at Magnolia Motor Speedway. The 3/8-mile track in Columbus, MS, opened in 2004 and has hosted several Sprint Car and Late Model events since, but will be graced by the World of Outlaws for the first time in 2021.

“We’re looking forward to having the World of Outlaws race at the speedway and make their return to Mississippi,” Magnolia Motor Speedway Promoter Johnny Stokes said. “It should be a pretty good show here.”

I-70 Speedway (Fri.-Sat., April 30-May 1) – While the World of Outlaws visited I-70 Speedway in the 1980s, when the Series returns to the Odessa, MO, facility this year it will be an entirely new 3/8-mile track. It closed in 2008, but was purchased by Chris Payne, who revamped Heartland Motorsports Park in Kansas. He has turned the facility into a state-of-the-art motorsport park with the new dirt track and a dragway.

Dixie Speedway (Fri., Feb. 12) – Instead of taking a few weeks off after the season opening DIRTcar Nationals, the World of Outlaws will hit the road and make its return to the 3/8-mile Dixie Speedway in Georgia. The Series has made three previous appearances at the track, with the last coming in 2007. Mark Kinser won the first two events in 1999 and Joey Saldana won the last.

Talladega Short Track (Sat., Feb. 13) – After stopping in Georgia, the World of Outlaws will make its return to Alabama the following day at the Talladega Short Track. The Series last visited the 1/3-mile track in 2011, which saw David Gravel pick up his first career victory. There have been seven different winners in the Series’ 11 appearances at the track.

“Talladega Short Track was a blast back when I was there and I’m excited to get back,” Gravel said.

West Coast Swings (March 4-April 10 & Sept. 3-Sept. 18) – After missing out on a West Coast Swing last year, the Series has Spring and Fall swings planned, featuring the return of several exciting venues. The Spring swing will kick off Thursday, March 4, at The Dirt Track at Las Vegas before going to Arizona Speedway the following weekend and then to California. The California tour will include the Series’ return to Santa Maria Raceway for the first time in 21 years and its return to Merced Speedway for the first time since 2014. The Spring swing will then conclude at Vado Speedway Park.

“I’m really excited we’re heading back to Placerville,” two-time and defending World of Outlaws champion Brad Sweet said. “It’s my home track and I missed not being able to race in California this year in front of all my friends and family. It just didn’t feel like a real Outlaw schedule without the West Coast Swings.”

Sharon Speedway (Sat., May 22) – For the first time since 2016 the World of Outlaws will feature three Ohio tracks on the schedule with the addition of Sharon Speedway in 2021. The 3/8-mile track in Hartford, OH has hosted nine Series races in the past with the last event taking place in 2007. None of the current full-time drivers have won a Series race at Sharon.

New York Tour (Fri.-Sat., July 30-31) – COVID-19 canceled all plans of racing in New York in 2020, but the World of Outlaws will look to venture North again in 2021 for a doubleheader weekend. For the first time since 2018, on Friday, July 30, the Series plans to return to Ransomville Speedway and then on Saturday, July 31, to Weedsport Speedway.

Crown Jewels – The Jackson Nationals, NOS Energy Drink Knoxville Nationals, Kings Royal and Williams Grove National Open return in 2021 as cornerstone events on the schedule. There will be an additional $100,000 on the line for the Jackson Nationals if a driver can win the finale of the Huset’s 50 – taking place a day ahead of the Nationals – and win the Nationals finale. Also, the 60th NOS Energy Drink Knoxville Nationals will pay a potential $200,000 to the winner with each lap paying $1,000 to the driver that leads it.

Finally, as released earlier, the 2021 schedule will also feature the Series’ increased purse, which will pay at least $10,000 to the winner each event.

He’ll look to do that year-round in 2021 when he joins the Series full-time for his rookie season.

“We had been talking about joining the tour for a couple of years now, we just put all of the pieces together for this coming year and felt like this coming year was the right time to do it,” said Zearfoss, of Jonestown, PA.

Zearfoss will run the full tour in his own Moose’s LZ Bar & Grill #3Z, joining Aaron Reutzel in the hunt for the Kevin Gobrecht Rookie of the Year title. He ran 16 races with the Series in the family car this year, earning three top-five finishes and five top-10s – one of his best seasons with the Series to date. In total, he’s ran 57 races with the World of Outlaws, collecting one win, four top-fives and nine top-10s.

His career started in go-karts before gradually moving up the racing ladder to Micro Sprints, 358 Sprint Cars, 360 Sprint Cars and then 410 Sprint Cars. The past few years he’s expanded beyond the local Pennsylvania, traveling out of state more, mostly in the Northeast and Midwest with the All Star Circuit of Champions – earning four wins in the Series.

The challenges of running his own team on a 90-plus race schedule, that spans from coast to coast, are not lost on Zearfoss. Along with calculating costs, there are several unknowns with traveling to multiple new tracks and areas he’s never been to. However, with the support from his sponsors and leadership of veteran crew chief Shane Bowers, he’s confident they can make it work.

“Going from racing every Friday and Saturday night locally and working 40-hour weeks to becoming a full-time driver, traveling up and down the countryside, there’s a lot of key components that go into making this successful and making sure you can make it the whole year,” Zearfoss said. “Hotel bills and fuel costs alone are huge expenses, on top of racing. Fortunately, I have Shane Bowers, who has been up and down the road enough to have the smarts to do it right. He’s been up and down the road with a lot of good teams.”

Bowers and Zearfoss were paired together in 2018 when he joined Destiny Motorsports. They immediately connected, Zearfoss said, and had success, making the Knoxville Nationals in their first attempt together. Bowers has flown side by side with the “Jonestown Jet” ever since.

Having Bowers by his side and the confidence of knowing he can win against the Outlaws is a recipe for success in Zearfoss’ eyes. He said he believes his team is capable of finishing inside the top-10 in points and getting a win next year.

“Just all comes down to racing on the road,” Zearfoss said. “Traveling, that’s what makes the Outlaws the best and the best drivers in the world. They’re always traveling to different places every night and dealing with different circumstances and having to adapt pretty quick. It just makes you a better driver overall. Not to mention the competition is the toughest there is. You need to be on top of your game and it forces you to do that, racing with the Outlaws.

“If we can make a couple of new fans, see some new racetracks and gain all of the experience that we can it’s going to be a good year.”

Zearfoss will start the 2021 season with the rest of the stars of the World of Outlaws Feb. 5-7 at Volusia Speedway Park for the 50th DIRTcar Nationals. 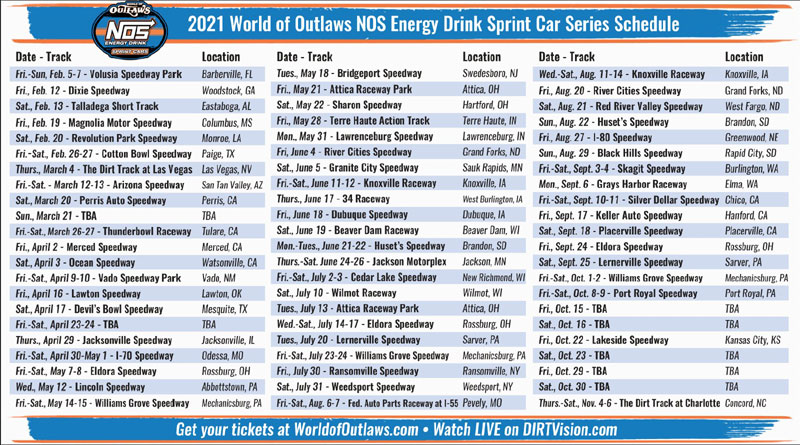